A year ago, wrongful convictions and the death penalty were not something that crossed my mind very often. As a Japanese major, I generally stay in the same academic “bubble” of Japa-nese courses, venturing out only to learn the very basics of other academia through GE courses. Some of the classes I have taken have made a lasting impact on me as a student; but most of these classes come and go, only to be focused on for the semester and forgotten soon after. De-spite universities’ best efforts to encourage students to take as much lifelong knowledge and experience as they can from their classes, the fast-paced timeline of a semester combined with larger class sizes gives way to the current system for many: take the class, pass, and move on.

Last semester, I decided to take a GE through the school’s Honors program, which challenges the usual expectations for GE classes by creating smaller, more engaged classes that still fulfill the same units as the non-honors equivalent. The class I took focused on wrongful convictions, and was taught by Dr. Stacy Mallicoat, a PhD in Criminology, who has spent over a decade re-searching Feminist Criminology, Juvenile Delinquency, Death Penalty, and Criminal Justice Poli-cy. After the first day of class, I was quite curious about the topic. While I was aware of the term “wrongful conviction” and what it meant, it wasn’t something I heard about very often or knew much about. Admittedly, I had originally assumed that wrongful convictions — while defi-nitely an issue — were probably easily reversible as long as the defendant had substantial proof. I had thought that if not, there would be more headlines around such a problem, right? The dis-cussion on the first day of class made me think more deeply about the issue than I had before: What causes wrongful convictions? What happens after someone is wrongfully convicted? How “just” is our justice system?

While I expected our class to be much more engaging and thought-provoking, I was not prepared for the impact it would have on me long after the semester ended. Throughout the class, we explored several causes of wrongful convictions, and studied in detail cases from the National Registry of Exonerations. The weeks that had the biggest impact on me, however, were when guest speakers Obie Anthony and Franky Carrillo, both wrongly convicted and imprisoned, came to tell their stories in class. Speaking with them about their experiences provided a perspective on wrongful convictions that a book or lecture could never convey. It was heartbreaking to hear how much they had endured for a crime they never committed. I knew their descriptions were likely only a small window into the roller-coaster of emotions they experienced during their time unfairly incarcerated. Our meetings with Anthony and Carrillo stuck with me for the entire semester.

As the semester came toward an end, we began preparing for our final projects. The assignment was centered on advocacy; specifically, it involved creating content about the causes and con-sequences of wrongful conviction. The guidelines were flexible; the project could be an essay, a video, or art work. I was instantly drawn to the idea of creating an art piece. As an artist, I wanted to express the ideas I had and emotions I felt hearing the experiences of those who had been wrongfully convicted.

I decided to paint an image using thick brushstrokes, each one clearly visible and touchable to the viewer. The total number of brushstrokes on the painting totaled 2,784 strokes, one for each of the men and women listed on the National Registry of Exonerations at that time. For a while, despite knowing the method of painting, and what it symbolized, I struggled to choose what to paint. Originally I had chosen an image that represented my original reaction to hearing the sto-ries of those wrongfully convicted. The painting focused on how horrible such an experience must have been, and the negative emotional impact it must have had on all of them.

But while the negative side of wrongful convictions stuck with me throughout the semester, while painting the image, I had a lot of time to reflect on the stories we read and heard, from those like Anthony and Carrillo. Although I had already decided on my project and had been working on it, something didn’t feel right about it. It was only after many hours of painting and reflecting that I finally came to an important realization: despite how immensely damaging it is to be wrongfully convicted, Anthony, Carrillo, and many others we learned about, had some of the most positive and strong personalities I have ever met. The way they carry themselves and interact with the world doesn’t reflect a person who has come out of a negative experience bit-ter and angry; instead, they radiate an energy that gives others happiness and peace. I realized that their strength was what I wanted to focus on for the image of my painting.

Although a little simple, I decided to change the painting’s image to that of a raw diamond. It symbolizes that even though exonerees have gone through enormous heat and pressure, they emerged from those experiences as incredibly strong, beautiful individuals. Those qualities make them unique, and it would have been a disservice for me not to showcase that in my pro-ject.

Almost a year later, the contents of our wrongful conviction class still often cross my mind. Un-like the countless other classes I have taken, learning about the injustice of wrongful conviction and the death penalty is not something I can move on from easily. Dr. Mallicoat’s class marked the start of my journey to understanding the how and why people are wrongfully convicted, an issue I continue to learn about. One of the main surprises to me was how these issues are not discussed nearly as much as they should be. Creating conversation about the truths behind wrongful conviction and the death penalty is a small step I can take every day. Another habit I have developed is to stay informed within the community through organizations and initiatives that are making a difference. Through them, not only do I continue to learn about these topics, but to also find more opportunities to make my voice heard through petitions, letters, and events.

Even though ending the death penalty and wrongful convictions seems beyond my individual ef-forts, staying connected reminds me that there are so many of us trying to end the injustices in our criminal justice system. Although our work is yet to be done, it gives me hope to see the small and large victories by advocates in the headlines. A recent one is the fact that since com-pleting my painting, the number of exonerations in the National Registry of Exonerations has gone up by nearly one hundred. Although I am still in the beginning of my advocacy journey, I’m so grateful to be a small part of the process of change.

###
Ashley Cook is a senior Japanese major and Art minor at California State University, Fullerton. Her interests and academic pursuits lie at the intersection of art and Japanese language and culture—where she routinely seeks to challenge audiences and herself through thought-provoking traditional and experimental works, as well as intercultural enrichment. After her graduation in Fall 2021, she aspires to work collaboratively and independently on projects to highlight Japanese communities both domestically and internationally.” 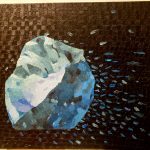 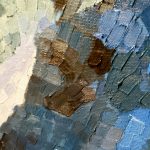 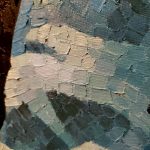 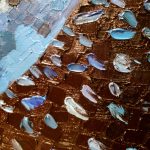 The tragic case of Kevin Johnson, set to be killed by Missouri this month

In one week, the Oklahoma Court of Criminal Appeals denied two petitions filed by Richard Glossip for an evidentiary hearing...
Read More