As executions have declined and public opinion of the death penalty has hit a record low nationwide, many looked to California as a test of whether the public — not courts or governments — was ready to overturn the practice.

But California voters on Tuesday defeated a measure to repeal capital punishment and, as of Thursday, were on course to narrowly approve a dueling proposition that aims to amend and expedite it.

Death penalty supporters lauded the outcome, saying it reflected what they have been pointing to all along: Most Americans want the system fixed, not ended. But abolitionists argued that campaigns in favor of capital punishment benefited from the so-called “Trump effect,” a wave of mostly white, male voters from rural areas energized by the Republican presidential campaign of Donald Trump.

Proposition 62, which would have replaced capital punishment for murder with life in prison without parole, was defeated, with nearly 54% of voters in opposition.

Awaiting approval is Proposition 66, which intends to speed up executions by designating trial courts to hear petitions challenging death row convictions, limiting successive petitions and expanding the pool of lawyers who could take on death penalty appeals.

It has won the approval of 50.9% of voters. California elections officials have been sifting through ballots cast by mail, which account for more than half of the state’s voter registration, and may not have a full handle on how many are left to count until Monday. 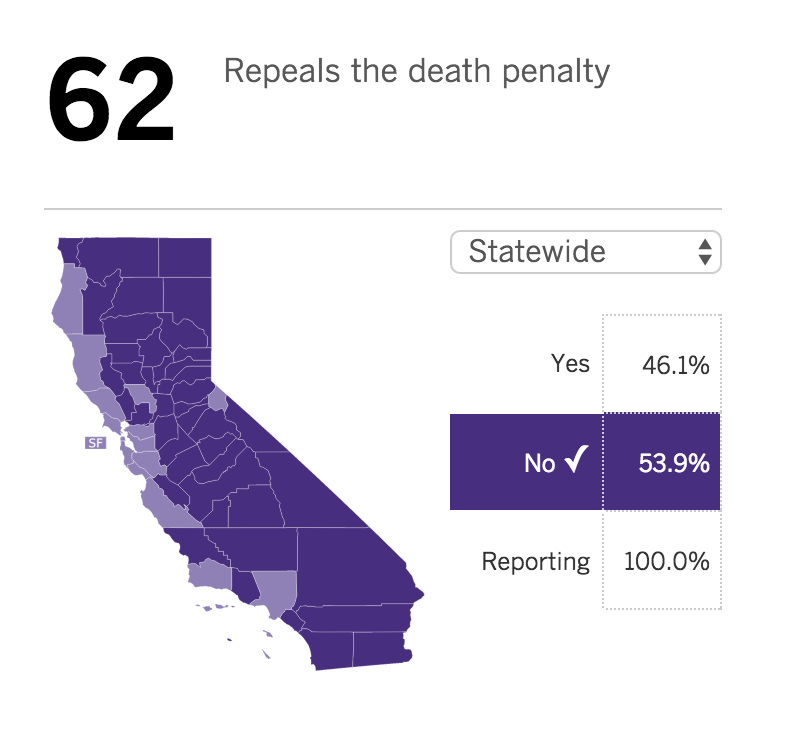 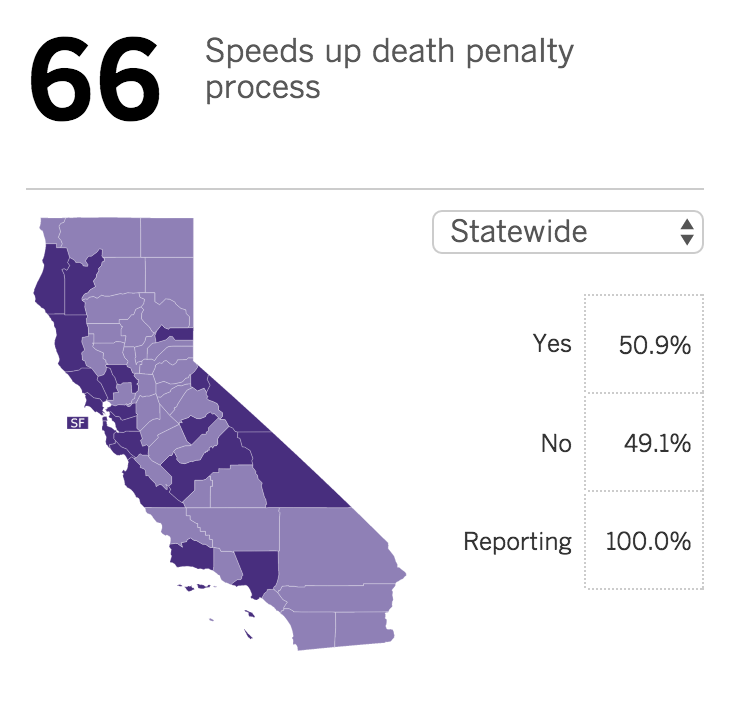 In a petition filed late Wednesday with the state Supreme Court, Van de Kamp and Briggs call the proposition invalid, saying it impairs “the constitutional and inherent powers of the courts.” Proposition 66 supporters argue their claims are spurious.

California had been one of the most significant states to watch regarding its decision on the death penalty, legal experts said. With nearly 750 inmates awaiting execution, almost double the number in Florida, the state has the second-highest death row population in the country.

The ballot race results showed a large divide over capital punishment in keeping with national trends and followed voter decisions in favor of the death penalty in Oklahoma, which became the first to approve state constitutional protections for it, and in Nebraska, where voters overturned bipartisan legislation repealing it.

Capital punishment supporters, among them many prosecutors and law enforcement officials, said they are now turning their efforts to implementing Proposition 66, which they contend will save taxpayers money and remove layers of bureaucracy that slow the system down.

But so-called death penalty abolitionists, a diverse group of celebrities and Silicon Valley entrepreneurs, crime victims and lawyers, some of whom have devoted decades to ending capital punishment in California, pledged to continue fighting against it.

Former “MASH” star Mike Farrell, one of the leading anti-death penalty voices in the country, said he would resume his work against the practice at the helm of the nonprofit Death Penalty Focus.

“I think we were swimming upstream against a lot of anger and fear generated by the Trump campaign, and it trickled into our area,” Farrell said. “There was a lot of fear of bad people, of illegal people, of Muslim people, of ‘the other.’ ”

Election analysts could not definitively say whether there was a Trump effect in California. But a recent USC Dornsife/Los Angeles Times poll found a certain overlap between Trump supporters from rural and inland regions of the state, while those along the coast favored Hillary Clinton and opposed speeding up the death penalty process.

Precinct reports from Tuesday show that in San Francisco County, for example, 31.8% of voters supported Proposition 66, compared with 59.8% in Lassen County and 57.7% in San Bernardino County.

Los Angeles was sharply divided, with 49% of people voting for it and 51% voting against, while in Riverside County, which leads the state in executions, 57.5% of voters favored the measure, 42.5% did not.

For now, many questions remain about the implementation of Proposition 66, such as how the state will staff up with additional private attorneys. The California Department of Corrections and Rehabilitation has submitted its final execution method protocols to the Office of Law Administration for final review.

But under the provisions of the ballot measure, the department no longer has to comply with that administrative process.

Legal experts said they expected to see many more challenges in court over what they say is the measure’s erosion of defendants’ rights. Lawyers also are likely to bring legal challenges on behalf of individual death row inmates and against the state corrections agency over the lack of transparency in the execution protocols approval process.

Ana Zamora, manager of the No on Prop. 66 campaign, called the measure “legally and practically unworkable.” She said its opponents, including the American Civil Liberties Union, intended to bring forth legal challenges as early as this week, though she declined to specify any details.

“California just made a mistake the size of Texas,” she said.

Sean Kennedy, a constitutional law expert and the executive director of the Center for Juvenile Law and Policy at Loyola Law School, said lawyers were likely to argue that the proposition violated due process in habeas corpus petitions, which death row inmates file to challengetheir convictions. Proposition 66 would require lower courts to hear those cases, instead of sending them directly to the overloaded California Supreme Court.

“For 40 years, the state Supreme Court decided all the capital habeas petitions to ensure uniformity and fairness in the application of the death penalty in California,” Kennedy said. “Now all bets are off because the individual trial judges will decide those issues, leading to conflicting decisions and inconsistent application of the death penalty throughout the state.”